Dinner in the Lords with Lord Rami Ranger of Mayfair 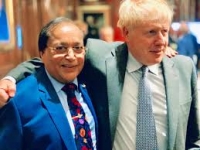 Our host this evening is Lord Rami Ranger of Mayfair, one of the most successful businessmen in the UK today. A winner of no less than five Queen’s Awards for Enterprise and the IoD Director of the year in 2013. He was awarded a peerage in Theresa May's resignation honours list.

His journey started with a dramatic flight from home during the turmoil of the break-up of India in 1947, then following the assassination of his father, childhood hardship under the guiding hand of his mother, emigration to England and the long fight against prejudice to achieve success on a scale he could hardly have imagined as a naive young immigrant in London in 1971.

Rami started his first business in 1987 with just £2 capital, from a shed, shipping cargo by sea, air and land. Today, he is the Chairman of Sun Mark Ltd and Sea Air & Land Forwarding Ltd.  Both of his companies received the Queen's Award for Export Achievement in 1999 and the Queen's Award for Enterprise 2009, 2010, 2011, 2012 and 2013. When Rami was asked about his business ethics, he answered, "My work ethics are simple. I only succeed when my customers succeed. I work hard for the success of my customers which ultimately becomes my own success.

In November 2014, he was named the Man of the Year at the GG2 Leadership Awards in London with the award presented by the then Prime Minister, the Rt. Hon. David Cameron. In his speech, Cameron singled out Ranger as an example of how people can assimilate into British society and become highly successful and a role model for others.

Rami is now a multi-millionaire many times over and has written his life story "From nothing to everything". As Rami himself puts it: "My story shows that one does not need a rich father, an elite education or the old schoolboy network to help one in life. What one needs is self-respect, ethics, commitment and empathy for others."

So come and meet a real inspirational speaker.

The menu is yet to be decided

Price is £114 pp (including VAT) for members (and first guest). Additional guests or non members £140 pp.

We hope to get agreement for an official guided tour of the Palace for those who wish. This will start at 18.30 promptly and last for 45 Mins. There will be an extra charge of £10 per head. Please make sure you have registered your interest.